Publicising things well in advance? This is so not RISC OS!

The RISC OS User Group of London has already made plans for guest speakers for a few meetings in the coming months, and has put that information “out there” so that anyone interested – and who is able to venture into the nation’s Capital – can plan ahead.

The first of these is this month’s meeting, which takes place on Monday, 16th April. Talking on the theme of “30 Years up in ARMS”, the guest speaker is Clive Semmens.

The “30 years” in question refers to how long he has been working and playing with the ARM processor, starting when he purchased an Archimedes computer for a classroom in Stornoway, all the way up to the present day, still using them now in retirement, writing programs for RISC OS – and a regular poster on the RISC OS Open forums.

In the middle of that long period, Clive also spent ten years working at ARM, where he was the senior technical author on the ARM ARM – and no, that’s not a tautology; while one of those ARMs refers to the processor family, the other stands for Architecture Reference Manual.

Next month’s meeting takes place on Monday, 21st May, and that meeting’s theme is “Pi Projects” with Andrew Conroy as the guest speaker. 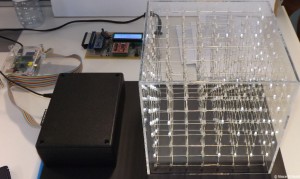 Most, if not all, readers of this site will recognise the name; Andrew is the moderator of the comp.sys.acorn.announce usenet newsgroup, and also works at CJE Micro’s. As well as being on hand at the little shop with a lot of stock,  Andrew regularly attends the various RISC OS shows the boss, Chris Evans. CJE Micro’s were sadly not present at the recent South West Show, but Andrew was – he exhibited in his own right, showing off a collection of his spare-time projects, centred around interfacing things with the Raspberry Pi.

And that’s what Andrew will be talking about and showing off at the May meeting in London – his collection of Pi interfacing projects, including vu-bars, sensors, LED rings, simple games and more. Of course, all of this is done in RISC OS – using BBC BASIC no less – and Andrew will show how it’s done.

Jumping forward a few months, the next meeting with a known subject – albeit still to be confirmed – is September. The meeting will take place on the 17th, and the guest speaker planned for the meeting is Keith Emerton on the subject of “Aerospace Testing”. Keith will be recounting the fascinating story of how Acorn computers are used in the field.

Now if you read that last sentence carefully, you’ll notice present tense was used – how Acorn computers are used – and that’s not a mistake; apparently they continue to be used – including a BBC Micro that has been performing a service in the field for over thirty years.

The group’s meetings take place regularly on the third Monday of each month, kicking off at 7:45pm, in the restaurant upstairs at:

Admittance is free, so anyone with an interest in RISC OS is welcome to attend, and the venue serves a wide range of hot and cold food, as well as both alcoholic and non-alcoholic drinks.

The Blue-Eyed Maid is easy to reach by public transport, being located only a couple of minutes walk from Borough tube station and five minutes from London Bridge station. Waterloo station is a ten minute, two stop journey from London Bridge (on the Jubilee line), and Euston and Kings Cross/St Pancras are twenty minutes away, heading southbound on the Bank Branch of the Northern Line to Borough.

There’s also the possibility of driving, but that means dealing with London traffic and parking, so that’s probably something only for the brave or the foolish – or both.

ROUGOL also organises the London Show, and the date is already set for this year’s event – Saturday, 27th October. It will take place at its usual venue, the St Giles Hotel, Feltham, and doors will be open to the public from 11am until 5:00pm – keep an eye on the show website for more news about the event as it draws closer.