Group’s first meeting of 2016 sets a high bar for the rest of the year!

Unless you’ve been asleep since just before the recent London Show, you will be aware of Titanium – the subject of a surprise announcement the night before the show. Developed by Rob Sprowson of Elesar Ltd, Titanium is a new motherboard designed from the outset with RISC OS in mind. 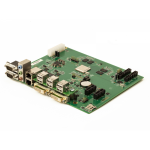 Rob will be bringing a working Titanium system along to the next meeting of the RISC OS User Group of London, which takes place on Monday, 18th January, where he will be talking about how and why he designed it, and demonstrating its features and performance.

The board is already available to purchase directly from Elesar – though obtaining it that way means sourcing the other necessary components that would turn the board into a fully fledged computer. For those less willing (or able) to do that, it is expected that complete systems based around the board will eventually become available from CJE Micro’s and R-Comp1.

The meeting takes place at the usual time and in the usual venue – so that’s from around 7:45pm at:

The meeting is free for anyone to attend, and the venue serves a range of hot and cold foods, along with both alcoholic and non-alcoholic drinks. It’s located between – and within easy walking distance of –  London Bridge and Borough tube stations, making it easily accessible by public transport. There is also nearby cycle parking.

For drivers, the Congestion Charge cut-off time is 6:00pm, an hour and three quarters before the meeting starts – though you do need to consider parking, which is restricted at all times on double red lines. On single red or yellow lines, it’s best to park after 7:00pm. Also, note that this is central London, so if you aren’t familiar with driving or parking in the nation’s capital, you should allow for extra time, and show extra patience!

Help, if needed, is available by contacting ROUGOL, either by email, by telephone on 07970 211 629, or via the group’s Twitter account.

The guest speaker at ROUGOL’s meeting last March was Leila Johnston of Hack Circus, a quarterly live show and magazine, and free copies of the magazine were dished out to visitors to the London Show while stocks lasted.

For those that enjoyed the talk and/or the magazine, there is currently a 20% discount on the price of an annual subscription – an offer that ends on 15th January.