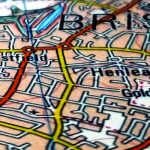 If you need to find your way from ‘a’ to ‘b’ you have a number of options available to you, with the most modern of these being to use a SatNav. However, some people (hello!) find their nagging insistence that you do what they tell you somewhat annoying, so very rarely bother to use them.

Bugs squashed – easier than giving them a map and sending them on their way. Sine Nomine Software have released a new version of RiscOSM, their mapping software for RISC OS. Version 1.21 of the application, which uses map data converted from OpenStreetMap, is now available to download as a free upgrade for existing users.

Bridge? What bridge? Sine Nomine Software’s Hilary Phillips has announced a new version of RiscOSM. Version 1.07 allows the user to save the location under the mouse pointer, whereas previously the saved position was the middle of the map, and also fixes a few issues that could previously cause RiscOSM to either crash, or omit features from the map.