I had no idea computers contained fat or sugar – but this one definitely doesn’t! 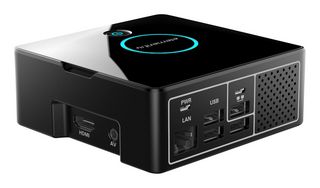 Putting on his 4D hat, Chris Evans has introduced a new computer in the RaspberryRO range, this one given the ‘Lite’ suffix.

The RaspberryRO Lite takes the form of a Raspberry Pi (but you probably guessed that from the name) in a ‘nano’ desktop case, measuring 108x108x45mm, with RISC OS pre-installed and ready run. Storage is provided for by an internal mSATA drive, which takes up one of the usual four USB sockets on the Pi.

In its default configuration, the computer’s specification is as follows:

Since what it contains is a Raspberry Pi, the usual selection of outputs are available – HDMI, audio, 10/100Mbps ethernet and three USB sockets (as noted above, the fourth is used for the internal mSATA drive).

Chris says there is a small quantity of the machines available from stock now, with more expected from late August – and with the London Show taking place a couple of months after that, you can probably expect a RaspberryRO Lite to be one of the things that will be talked about and held up for the audience to squint at during his theatre presentation.

As well as the new Lite edition, the other models in the RaspberryRO range will continue to be available, since their larger case sizes mean there is greater scope for expandability, with – for example – internal optical drives, 2.5″ SATA drives, and so on.