Elesar Ltd has made available a new release candidate ROM1 for Titanium-based systems, this being number five – known amongst family and friends as RC5 – and while there are a number of changes in the update, the headline feature is that it brings with it support for 256 colour screen modes.

Anybody thinking in practical terms, and who therefore uses their computer for practical things, might miss one of the key points of this – and that key point is FUN! While a ‘true colour’ screen mode might be the norm these days for desktop use, where words might be processed, photos might be shopped2, and desktops might be published3, things were not always so. 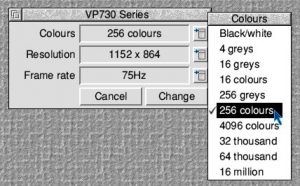 Back in the days when we had either Archimedes or RiscPC machines on our desks4 there were a lot more games available to buy for our computers than there are now – and quite often, those games ran in 256 colour screen modes. Of course, this doesn’t mean all of those old games will now be usable on the Titanium – except perhaps under emulation – but there are certainly some that will now work on the platform.

Regardless of games, however, with the addition of 256 colour modes, Titanium now supports the full range of colour depths – everything from two to 16 million colours.

There are quite a number of additional changes with this release – there is a ‘changelog’ HTML file included with the ROM image that stands at over 200kB in size – but Elesar’s Rob Sprowson has kindly condensed that down into a short list of highlights:

The update can be downloaded from the Titanium product page on Elesar’s website by going to the ‘Resources’ section of the page. The zip file contains a number of files, including instructions on how to install the updated ROM as a softload, or by programming it to the motherboard’s boot flash.