Not quite as cheap as chips – but not far off at all!

When the Raspberry Pi was first announced, some people joked about its proposed price, saying things like if it was much cheaper, it wouldn’t be long before a computer was included as a free gift in a box of breakfast cereal. And while that hasn’t happened – yet – today saw something not that far removed: A computer provided as a free cover gift on a magazine. 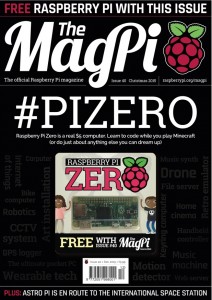 You could walk into WH Smiths and (I believe) Tesco, purchase the December issue of The MagPi, and – while stocks lasted – you would receive along with it a brand new Raspberry Pi.

So brand new, in fact, that it was actually a new model, dubbed Raspberry Pi Zero, which features:

That doesn’t sound terribly special compared with the B+ or version 2 Pi, and sounds like it sits somewhere between the A and B (or B+) series – something of a cut down A with more memory and a beefed up processor – but there are two additional things that particularly stand out about the Zero.

Firstly, the board measures just 65mm x 30mm; it’s a little wider than the others, but only a little over a third of the size from front to back. It’s very small.

And, secondly, the fact that the Pi Zero is cheap enough to give away on the cover of a magazine which itself costs just £5.99 in printed form should be a bit of a clue to this one: It’s very, very cheap.

“Okay,” I hear you asking, “it’s a new Raspberry Pi, it’s really small, and it’s incredibly cheap. But does it run RISC OS?”

Well, Chris Evans, has the answer to that one. Earlier today on the RISC OS Open forum, Chris said that he “nipped out to my local WHSmiths and bought one,” in order to try – and soon after provided this photograph: 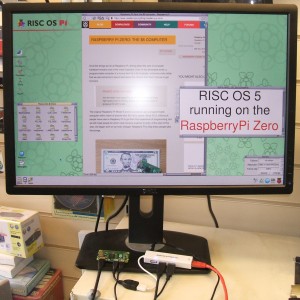 In other words, yes, yes it does run RISC OS!

The Zero is officially available from today – though it doesn’t yet appear to be in stock from the usual sources, including the Foundation’s own Swag Store. For the moment, then, the only chance to get one would seem to be if you can (still) find a copy of The MagPi in a newsagent.

Just like the man who has everything in stock had to do!