This was going to be a news nybble, but two paragraphs weren’t nearly enough!

A couple of years ago Tom Williamson of Ident Computer brought his Raspberry Pi-based kit computer, the Micro One, to the world of RISC OS – and in February he will be unveiling a follow-up system, the Ident Compact Edition, or Ident CE for short1.

A teaser image of the Ident Compact Edition, courtesy of Ident Computer

The Ident CE is aimed squarely at users of the now ubiquitous Raspberry Pi, and like its predecessor it will come as a kit so some self assembly will be required. However, while the Micro One housed the computer in a wedge-shaped box along with the keyboard, making it similar in size and shape to the Acorn Electron, the teaser images on the Ident Online website show that this isn’t the case for the new system. 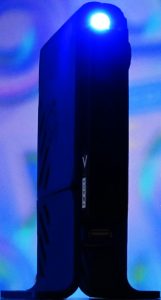 A teaser image of the Ident CE, courtesy of Ident Computer.

As yet, other than the teaser images (one of which is reproduced above and, depending on your browser, one to the right), no firm details of the Ident CE have been released – Tom says he will be making an announcement and releasing more information in February. However, there is a certain amount of information that can be gleaned just from those images, and more still that can be guessed at.

The first and most obvious thing is that it can be set up either vertically or horizontally – the topmost image shows it in a horizontal configuration, with a set of feet underneath, while the one to the right (which can be clicked to see a larger version) shows the system standing tall and proud, with the sides curving outwards at the bottom to form a stand.

The image to the right can also give some idea as to the system’s size, thanks to the USB port that is just visible on the front about a fifth of the way up – which on the primary display set up here in the RISCOSitory bunker appears to be approximately 75-80% of the size of the real thing when the image is maximised.

Measuring the overall system in the image and dividing by that percentage range, therefore, suggests a height (in vertical configuration) of about 18-20cm, and a width of around 7-8cm including the wider feet, or around 3-4cm for the main unit. In its horizontal configuration the height will therefore be a little over that 3-4cm allowing for the feet, and the width slightly less than the 18-20cm because curved stand is not present.

In both cases, the system’s depth is harder to determine because of the angle at which it is shown, but I’m going to hazard a guess that it’ll be somewhere in the region of 12cm.

Looking at the images out of the context of knowing that they show a Raspberry Pi-based computer, it would be easy to think they’re pictures of a projector, thanks to the very bright light shown in each. That light seems to be too large and too bright to be just a power indicator, so I’m going to take a really wild punt and suggest that either the Ident CE is going to be marketed as a ‘smart torch’, riding on the accursed ‘Internet of Things’ wave, or Tom has indeed built a pocket/portable projector into the system.

In either case, that would make a certain sense of the pun incorporated in one of the marketing images on the Ident website, where we are told that “CEing really will be believing.”

If you want to be one of the first people to find out just how wrong my guesses are, you need to be in Yorkshire on Wednesday, 7th February. That’s when Wakefield RISC OS Computer Club will be holding its next meeting, at which Tom will be the guest speaker, talking about his experiences with Acorn and RISC OS computers, developing the Micro One – and giving the group an exclusive first look at the Ident CE.

The next chance to see it after that will be at the Recursion Computer Science Fair, which will be taking place on Saturday, 17th February, at the King Edward VI School in Stratford-upon-Avon.

Whether it turns out that my guesses are right or wrong, however, one thing I can say with some certainty is that the images make the Ident CE look like a very sleek, even sexy, piece of kit.