Back in May, on the RISC OS Open forum, Rik Griffin identified a possible new target for a RISC OS port, from The Raspberry Pi Foundation, “a UK registered charity (Registration Number 1129409) which exists to promote the study of computer science and related topics, especially at school level, and to put the fun back into learning computing.”

The foundation is developing a very small computer, about the size of a USB stick, with an intended price tag of £10 to £15. David Braben – a name anyone familiar with the Acorn and RISC OS worlds should recognise – took a prototype along to the BBC in May to talk about it and the motivation behind The Raspberry Pi Foundation. 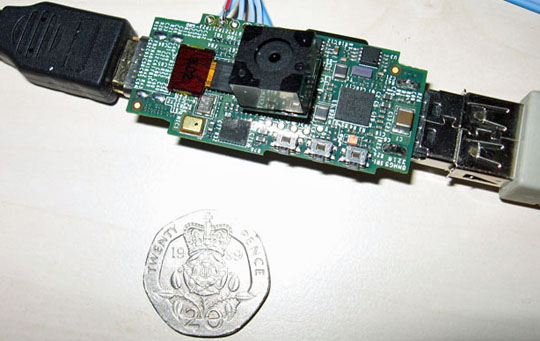 a Raspberry Pi next to a 20 pence piece

With a HDMI port on one end, and a USB port on the other, the computer itself sits between the two and boasts quite an impressive planned specification for such a small, cheap device:

That list, lifted straight from the Raspberry Pi Foundation website, lacks one other item – the planned operating system and software, which is given on the site as:

This is more or less what we should all expect; with the stream of new ARM based devices appearing, it’s often a Linux variant that will be mentioned as the operating system the developers either intend to run on it, or anticipate end users will be running on it – and clearly, that’s no different in the case of the Raspberry Pi. If there is any chance of RISC OS being ported, it’s up to one or more RISC OS developers to find the time and enthusiasm, get their hands on one, and do their best – just as we’ve seen with Jeffrey Lee and the Beagleboard.

With that in mind, a short discussion followed on from that initial post by Rik exploring the possibility, determining what information would be needed, etc, with a view to contacting The Raspberry Pi Foundation to obtain it – with the ultimate goal of, hopefully, getting RISC OS running on this ultra-low cost ARM based computer. Before last night, the last post to that discussion was on May 23rd, again from Rik Griffin, informing everyone that he’d had a reply from his initial enquiry, in which he was “testing the waters” with reference to porting RISC OS to the computer. They’d said:

Yes, we’ll definitely support porting other OSs, though for the first little while it may be a case of reading our Linux kernel sources for pointers about the hardware.

Before last night. What happened then?

Eben Upton, one of the directors of The Raspberry Pi Foundation registered on the forum and posted to that discussion, saying:

Can you give me an idea of what you’d need in the way of help to get RISC OS going on the Raspberry Pi device? No promises of support, but it would be a neat thing to have as an OS option.

While he clearly says “no promises of support”, that one of the directors has sought out the forum and made this comment is surely a good sign. There are any number of ways he could have found his way there – for example, Rik may have included a link in his email (or a subsequent one) to the RISC OS Open site, the forum, or that specific discussion – but whatever led him to the forum and discussion, it’s certainly a very welcome development, and given the involvement of David Braben, it’s nice to imagine that it’s his historical connection with our favourite platform that has prompted it.

(With thanks to Martin Bazley for bringing this to my attention.)