That’s apparently pronounced “minim” which means I can’t make any Mini Me references. Um… like that one.

Shortly before this year’s Wakefield Show, R-Comp teased us with the news that they had a small surprise in store for visitors to the show, which visitors soon discovered was a new, small computer – the mini.m.  Based around the same processor as the ARMX6, a quad-core Freescale i.MX6, the mini.m is for all intents and purposes a smaller version of the established machine – with some obvious differences due to its small size.

Just how small is it? The computer is housed in a cube-shaped case measuring just two inches in each dimension – a very small, incredibly convenient piece of kit that can be placed in a discreet location on your desk without taking up a lot of space. 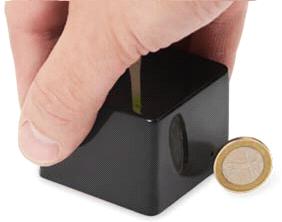 Packed into that small size is the same processor as the ARMX6, as noted above, along with 2GB RAM. The system has two USB ports on the back, along with a gigabit ethernet port1. HDMI is supported for up to 4K graphics – along with audio over HDMI. Power can be via a dedicated power supply, or via USB.

One of the differences between ARMX6 and mini.m is that it doesn’t include an internal SATA SSD – with drives measuring two and a half inches, they are a touch too big to fit into the case. Internal storage of up to 200GB is included, but in the event that isn’t enough the system does include an eSata II port, allowing an external SATA device to be connected.

Also not included is a card reader (which typically measures three and a half inches) or an optical drive (five and a quarter) – but there is nothing to stop any of these being connected externally via USB.Being based around the i.MX6 processor, the mini.m shares a very similar code-base to the ARMX6 – it’s not identical, but the differences (which are the reason the machine could be demonstrated at Wakefield but is only now seeing a formal release) are small enough that software updates for both platforms in future should happen at the same time.

So how much is R-Comp asking in exchange the mini.m? The basic machine costs £299, with pro and deluxe bundles available for £349 and £399 respectively – although R-Comp does not appear to have released any details yet as to what those might include.