No mention of eye of newt or toe of frog. 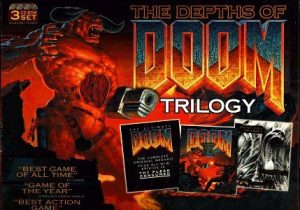 Fans of first person shooters should have a soft spot for Doom from id Software. While it wasn’t the first game of this type, it’s certainly one of the pioneer titles that helped popularise the genre, and led to a number of follow-ups and expansions. The game  featured texture-mapped surfaces and varying room and level heights – a step up from the simpler Wolfenstein 3D, the previous game from the same company – as well as mood-setting MIDI music, and the ability to swap out the internal data files (WAD, which stands for “Where’s All the Data?”) with alternatives, featuring new levels.

The game engine was ported a number of platforms, including RISC OS, and a fully licensed commercial version was released and sold by R-Comp Interactive in 1998 – and last year the company released a new version of Final Doom, updated to work on modern RISC OS hardware, and benefiting from the option to use an MP3-based soundtrack rather than the original MIDI music.

The company has now followed that up with another release – a new version of the Doom Trilogy, based around their original Ultimate Doom and Doom 2 stock. Once again, this version includes the option of an updated digital soundtrack that can be played in place of the original MIDI music. The game is fully compatible with all modern RISC OS computers, including those machines that require RGB/BGR colour swapping, such as Titanium.

Network play is fully supported, allowing you and some friends to battle it out, as are a huge variety of add-on “pwads” (patch-WADs), which means that once you’ve played the official games, you can seek out additional missions, level designs, graphics – even total conversions; what can amount to new games based around the same engine design.

As an added bonus, the new Doom Trilogy comes with the Acorn version of Wolfenstein 3D – id Software’s predecessor to Doom, which used a much simpler game engine. Being the original version, Wolfenstein 3D does work on modern platforms such as ARMX6, but requires Aemulor to do so. However, there is also a version included that is powered by the Doom engine – which therefore doesn’t need Aemulor to run, and also benefits from audio/visual enhancements.

The Doom Trilogy/Wolfenstein 3D package is available from R-Comp’s !Store, priced at £14.99 including VAT.