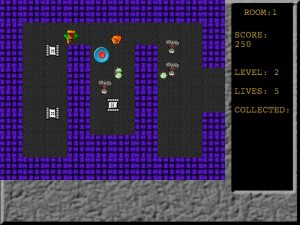 First launched and sold on CD at the recent Wakefield Show, Cyborg is a new release from AMCOG Games, and for those unable to attend the show, it is now available from !Store for £9.99.

In the game, you play a cyborg treasure hunter who has travelled to Castle CyberDroid in search of ancient treasure – and your objective is to find all of the items of treasure that can be found on each level, then head to the teleport to progress to the next.

Getting into the castle was just a matter of weakening its security system – RISC OS users are resourceful types, obviously – but weakening it was the best you could do; disabling it fully wasn’t possible. As a result, security robots are being teleported into the rooms around your location, which you must deal with in order to find the treasure.

You also have to contend with a holographic energy field called Buzz, which is activate when the system detects that you have been in a room for longer than thirty seconds – so presumably, if Buzz catches you, that’s a bit of a buzz kill.

The game was developed by Tony Bartram using the AMCOG Development Kit – another new product from the company – and features:

Updates are free – if and when a new version is made available, simply log-in to !Store and download the latest version. For those who have purchased the game on CD at a show, a code is provided to allow access to new versions in !Store – and if you purchased it at Wakefield, there is already an updated version waiting for you, with a number of improvements, as well as an extra game map and some bug fixes.