David Bradforth of Alligata Media has made two books available as free downloads via his Alligata site on MagCloud. 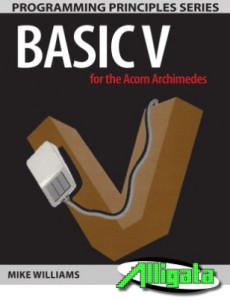 BASIC V for the Acorn Archimedes, by Mike Williams

BASIC V for the Acorn Archimedes was written by Mike Williams and originally published by Dabs Press in 1989, and was acquired by Alligata Media in 2005. According to the blurb the “book provides a practical guide to programming in BASIC V on the Acorn Archimedes. Assuming a familiarity with the BBC BASIC language in general, it describes the many new commands offered by BASIC V.”

A printed copy is available for $20.00 (currently about £12.50), and brings with it a free digital copy (1MB), but the digital copy is now available from the same location for free. For those wanting slightly cheaper dead tree copies, there are a few new and used copies available through Amazon.co.uk, including (at the time of writing) some copies from David himself through his  dbproaction account – one of which is listed at a slightly more expensive £199 plus delivery, described as “THE LAST COPY from the print run – Alligata”. 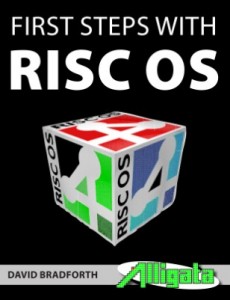 First Steps with RISC OS (sometimes listed with a ‘4’ on the end of that title) was written by David Bradforth and published by Alligata Media in 2004. This book’s blurb explains that “The RISC OS operating system has evolved over the years to gain a reputation as one of the most user friendly available. However for those new to an operating system even the most simple things appearing on the screen will lead to confusion and turmoil. This is where First Steps with RISC OS comes in. We are using RISC OS 4 as a basis for some detailed introductory tutorials to all aspects of the RISC OS operating system.”

A printed copy is available for $16.80 (about £10.50), and again brings with it a free digital copy (33MB), although the digital copy is now free anyway. The book is also available for free in HTML form via RISC World, the CD based magazine that published by APDL, and edited by Aaron Timbrell of iSV and VirtualAcorn, and which is now archived online. RISC World published the book in parts over a number of issues, starting with volume six, issue one. 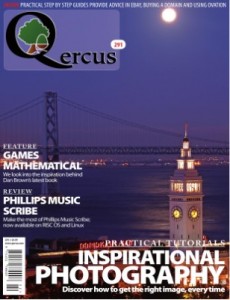 In addition to the two books, Qercus issue 291 is available from the same location. Qercus is described by Finnybank Ltd, who produce the magazine, as a fusion of Acorn Publisher and Acorn User magazines. Acorn Publisher was originally launched by Mike Williams and Akalat Publishing in 1994, and taken over by John Cartmell and Finnybank in 2002. Acorn User was launched by Acorn Computers in 1982, taken over by Redwood Publishing in 1984, Europress from 1994, then Tau Press from 1998, and finally FinnyBank in 2004, where it was merged with Acorn Publisher to form Qercus.

Annoyingly, you do need to sign up for a MagCloud account in order to “purchase” digital copies of books and magazines, even if they are free. The sign up process works using NetSurf on RISC OS, but once signed up and attempting to “purchase” your free downloads, the “Check Out” button is inactive, since it requires Javascript. Using a different platform circumvents this problem, and the publications themselves are downloaded as PDF files.