CE are family… I’ve got all my versions with me!

Following the surprise teaser released towards the end of January of Ident Computer’s new Raspberry Pi-based kit computer, the Ident CE, more details of the system have now been revealed.

Benefiting from the latest in 3D printing technology, the snazzy looking CE (which stands for Compact Edition)  consists of a base unit which comes in three variations – one for RISC OS users, and one for users of other operating systems, and one especially for the retro gaming community.

What are the differences between the three versions that make up the CE family? 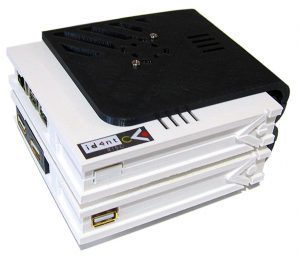 The Ident RISC CE, which consists of a white case and black surround, is the version reserved for RISC OS users, and includes access to Ident’s licensed and customised version of the operating system. This needs to be downloaded from the Ident website, and written to an SD card, which customers need to source for themselves.

Although pictured right as a two slice version, the Ident RISC CE is normally supplied in a single slice configuration. The twin slice version can be made available for private one-off commissions, but will obviously cost more than the regular version. 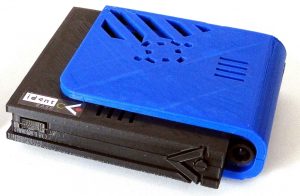 The Ident CE BASE – picture courtesy of Ident Computer

The Ident CE BASE, on the other hand, comes as a black case and blue surround, and is supplied without a licensed operating system.

Customers who purchase this version must source their own operating system, such as Raspbian, the official OS supported by the Raspberry Pi Foundation, or any other system available for the Pi, including the version of RISC OS that can be freely downloaded from the RISC OS Open website.

The Ident CE dRIVE is the third version, on offer to the retro gaming community. A black case with an orange surround, this version is recommended for the Raspberry Pi 3 with the Linux Retro Pie distribution (not included), and is supplied complete with a 5v mini cooling fan, with cables and fixings, and one USB gaming controller. 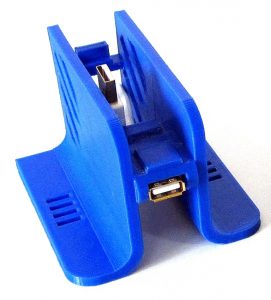 In addition to the three variations of Ident CE, there is also the CE USB Stand, an accessory that allows the Ident CE to be stood upright, rather than sat flat on the desk, thus taking up less desk space.

The stand incorporates a USB socket on the front, allowing easy access to one of the existing USB sockets on the CE, while the rest – to which you would normally attach your keyboard and mouse – are neatly hidden within the stand, helping to keep things nice and tidy.

On the software front, as noted above, customers who buy the Ident RISC CE will be able to download a licensed version of RISC OS. However, all CE kits will come with a download link for a Ident’s own “Linux Side” – a Raspberry Pi port of Debian, with the XFCE desktop installed.

Attendees of the Wakefield RISC OS Computer Club meeting that took place last week have already had a first look at the CE in the flesh. For the rest of us, the first opportunity to look at the system, and express an interest to Ident, will be at the Recursion Computer Science Fair, which takes place on Saturday, 17th February, at the King Edward VI School in Stratford-upon-Avon. Doors are open to the public from 11:00am, and entry is completely free.

The first units should be available to buy directly from Ident Computer at the RISC OS Southwest Show, which takes place the following week – 24th February – at the Webbington Hotel, in Loxton, Somerset. Doors will be open to the public from 10:30am, with a small entry fee. Online ordering should also be an option at this point.

Introductory prices for February only are expected to be:

Note that these prices do not include a Raspberry Pi, or any additional accessories such as a power supply, etc.

And referring back to my previous guess about the machine, where I pondered if it was going to include a pocket projector, the answer is that no such thing is mentioned in the press release, and at those prices it simply wouldn’t be possible.