And it has found a new home… in Bristol!

With the most recent Southwest Show having taken place in February, the organisers revealed the date of the 2019 event at the time of the even more recent Wakefield Show last weekend. The date of the next Southwest show will be on 16th February, 2019, so please mark that date in your diaries now.

The date of the next show isn’t the only thing to be revealed, though. The RISC OS Southwest Show 2019 will be taking place in a different venue – the Arnos Manor Hotel in Bristol – with much better links for people coming by both public and private transport alike.

The show has been held at the Webbington Hotel in Loxton, near Weston-Super-Mare, every year since its inception back in February 1998, so this year’s event was the 21st, marking twenty years since the first. And whilst the Webbington is undeniably a very nice hotel, it is not without problems – chief among which is its location. It’s nestled on the side of Crook Peak in the Mendip Hills, and not at all well served by public transport; the nearest main railway station is in Weston-Super-Mare, and buses won’t get you closer than a few miles away.

In short, if you weren’t heading to the show in your car, your best bet was to arrange to get there in someone else’s car; whether that was one belonging to a friend, also heading to the show, or one belonging to a complete stranger who makes a living out of giving people lifts – i.e. a a taxi! If not, you faced a long walk from the closest bus stop to the show, although it was possible to make that a very nice walk, by heading up and over Crook Peak, rather than along the road.

A story I was once told – which may or may not be apocryphal – is that when Jon Stonier and co were looking for a suitable venue for the first show all those years ago, they were driving up the M5 and spotted the hotel. It’s plainly visible from the motorway, and appears to be very close to it – so it looks as though it should have good transport links – and that was a big factor that led to it being chosen. I’ve no doubt that when they contacted the hotel to enquire, the staff very likely confirmed that it is easy to get to – and to be fair, it’s not at all difficult if you’re coming by car.

The reality would soon have dawned, however – but it wasn’t an insurmountable problem. Back then, RISC OS shows were much bigger events, typically visited by many more people than now, and for many years a minibus was laid on by the organisers, running from the railway station to the venue and back – the number and size of exhibitors, and the number of visitors, meant it would have been practical to do so.

But as the size of the shows and the visiting audience has reduced, so has the practicality of offering such an option.

With that in mind, continuing to run the Southwest Show at the Webbington Hotel was becoming an uphill struggle for the current organisers, R-Comp‘s Andrew Rawnsley and Orpheus Internet‘s Richard Brown – and the need to find an alternative venue has been a discussion point for a while.

Consquently, a search for that alternative venue has been going on behind the scenes for the last year or two – and the result of that effort is that the 2019 show will take place at: 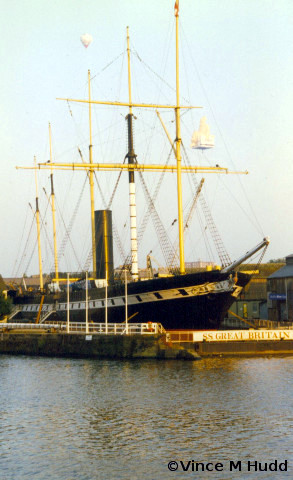 The SS Great Britain – one of Bristol’s many visitor attractions

The new location has very good public transport links – there are bus stops very close by, which are only a short ride from Bristol’s Temple Meads railway station – and it is on a major road into Bristol from the South, and a very short drive along a major road from the M32, giving access to the M4 (and thence the M5) and the rest of the country.

The room(s) that will be used for the RISC OS Southwest Show are on the ground floor, with direct access from the car park – so there is no need to wander through the main hotel to reach the event. The hotel bar serves a good selection of food, and you will find both a Burger King and The Black Castle pub and restaurant very close by.

Bristol itself has a wealth of things to see and do, with an A-Z of attractions from the Arnolfini, an arts centre, museum and gallery, to the city’s famous Zoo (one of the oldest in the world), and plenty more, catering to all tastes – so why not make a long weekend of it?

In fact, with the 16th February being just two days after Valentine’s Day, and with Bristol being home to a wide selection of restaurants, why not treat your other half to a romantic meal in the city, both as part of that long weekend, and as a bargaining chip so that you can attend the show?

You know it makes sense!