But cover up any private bits!

In yet another BASIC-based initiative on the part of David Feugey’s RISC OS FR, a tailored edition of the latest Desktop Development Environment from RISC OS Open Ltd is on offer to people who want to get into BASIC programming, for the grand price tag of zero pounds, zero pence1, and one screenshot of your RISC OS desktop.

The package on offer is based on the recently released DDE27, and specially tailored towards the BASIC language. As such, it includes a number of applications, tools and utilities: 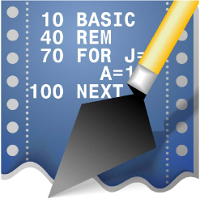 Archimedes BASIC Compiler (image taken from within the manual itself)

The following manuals are also included:

David explains that he will be sending out the package by email, along with a personal serial number. Should the recipient wish to do so, that number can be used to purchase the full DDE from RISC OS Open, with a 10% discount on its full price. The full package contains much more than just the BASIC components, and also includes the ‘Acorn’ C/C++ package and all the tools and utilities associated with that.

So, what was that price again? Oh yes – zero pounds, zero pence1, and one screenshot of your RISC OS desktop.

All you need to do to earn yourself a copy of this BASIC-centric version of the DDE is take one or more screenshots of your RISC OS desktop, preferably without cropping or resizing it (but ensure there is no personal data visible), and send them by email to basicdde4free@riscos.fr for publishing (anonymously) on the RISC OS FR website and release into the ‘public domain’ – i.e. they will be published with no restrictions on further use.

Are there any other conditions? Well, of course there are. While it’s free to the recipients, the DDE package on offer remains a commercial product of RISC OS Open – the licence is being paid for by RISC OS FR. It may not be distributed or resold, and the licence is non-transferable. Licence stocks are limited, so please try to limit your submissions to one per household.