Now copes with setirps as well as sprites.

Given that Chris Johnson has already added compatibility to Snapper for the new graphics format found on IGEPv5 and Titanium systems – not to mention the assistance he gave to David Pilling for Ovation Pro‘s support for the new formats – it’s probably not a huge surprise to hear that he has also updated ConvImgs (mirror), which is now at version 1.10. The new version should also be available via your favourite package manager, or via !Store.

The application is designed to convert graphics files between different formats, as its name suggests. It is used here in the RISCOSitory bunker, for example, to convert Sprite files into PNGs for use in articles – such as the application icon shown at the top left of this post, or the screen grab of the application’s own window below. 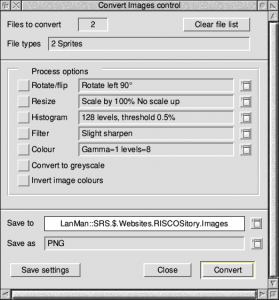 As the screen grab shows, however, ConvImgs can do more than just convert between different formats – it is also able to carry out a number of basic transformations on the images as it converts them, such as rotating, flipping, and scaling.

The main change in this new version is that it will now load the new types of sprite file that have come about in RISC OS 5 for the Titanium and IGEPv5 boards. On those systems, colours are stored in screen memory with the red and blue components swapped, so there are sprite file formats to match. When converting to sprite format, ConvImgs will always save “in RISC OS 3.5 format” according to Chris, so that “they are compatible with all hardware and OS combinations.”