When RISCOSitory ran the recent awards poll for the two years 2012 and 2013, the voting form also included a simple survey – the goal being to form an idea of what the RISC OS user-base is currently like,  what systems are in use, and so on. If the survey is carried out each year alongside the awards poll, it can theoretically reveal changes in the RISC OS landscape, such as whether we are attracting new users to the platform.The results of that first annual survey are now in, and have been published on the RISC OS Awards website.

It should be noted that the number of entries was just shy of 150, which might not ordinarily be considered statistically representative – but at the same time, we all know that the size of the RISC OS community isn’t particularly large, so that has to be noted as well. It is highly likely that there are RISC OS users ‘out there’ – both new and old – who were not aware of the poll and survey, and who therefore did not enter, so while the number of entries isn’t discouragingly low, it could have been notably higher – but either way, it’s a reasonable starting point, and we can only hope to build on it in future years. 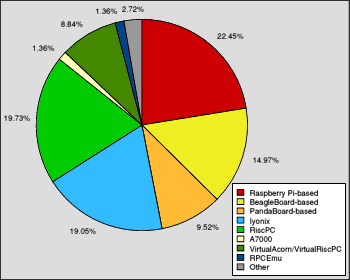 Some of the survey questions didn’t lead to any surprises in the results – for example, the overwhelming majority of users (91.03%) own more than one RISC OS computer, and a smaller majority (65.75%) make use of more than one of their RISC OS computers. On the other hand, some results were much more surprising – for example that 64.63% of users said the version of RISC OS they used most was a version of RISC OS 5 although, oddly, 65.99% of people said the platform they used most was one that should have been running a version of RISC OS 5! The use of different platforms was much more spread out, and it appears a small number of people are using the IOMD version RISC OS 5.20 on RiscPC-era hardware, which they consider to be their main RISC OS computer.

For a full analysis of the results, please refer to the 2013 RISC OS Survey Results page on the Awards website.