A perfectly safe way to enjoy magic mushrooms, with no hallucinogenic side effects.

During July, Martin Bazley issued a dire warning that version 1.12 of Magic Mushrooms had unexpectedly escaped into cyberspace!

The game is a complete rewrite for RISC OS computers of a platform game originally written by Neil Raine for BBC computers, and is based around a concept that couldn’t be simpler: Move around the ten levels, collect all the mushrooms, and make your way to the goal, while at the same time steering clear of the exceptionally stupid blobby inhabitants of this strange world. 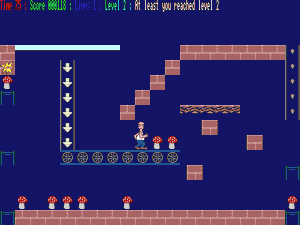 Martin explains that he originally released his RISC OS version of the game in 2009, “back when I had no clue what I was doing, and the interface was rather weird and the code rather ill-behaved. A number of these issues were progressively solved until I released what I thought was the final version in 2011.”

However, he recently tried the game on his ARMini computer, on which it crashed. Upon investigation, he found the problem lay in the code dealing with the screen mode, but also noticed quite a few other things in the code with which he wasn’t happy. He has consequently spent several days working on it, including “rewriting large chunks of the editor to make it behave almost like a proper desktop application.”

The result was version 1.12, which Martin says is much better than the previous version in a number of ways, and urges everyone who has an older version to download this one – and for those who haven’t yet tried the game, he adds that “you won’t regret it quite as much as you would previously have done.”

Since then, version 1.13 has also been released. This addresses two serious bugs, as well as improves overall reliability. In addition, it is now possible to disable the music and sound effects from the front-end, befire starting the game, and the game will also now start up if the TimPlayer module (which is used to provide the sound) isn’t installed.