Genetic mutation aborted and replaced with a newer, better, but otherwise identical version

Chris Johnson has released a new version, 1.17, of Snapper, a screen capture program, originally written by David Pilling and supplied with his scanning and image processing software, and now maintained and further developed by Chris. The application allows the user to save areas of the screen as sprites – much as can be done using Paint, supplied with all RISC OS machines, but with added bells and whistles. 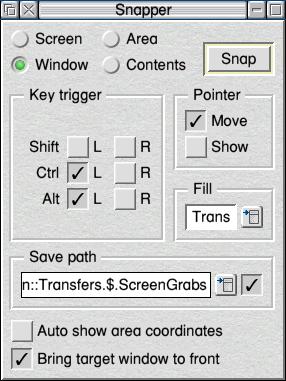 As well as the whole screen or a user-selectable area (with the size of the area shown and, optionally, the co-ordinates displayed in another window), a specific window or its contents are also offered as options by Snapper, and the screen grab can be taken immediately or in response to the user pressing a configurable key-combo.

There are options to remove the pointer (and, if it’s over a menu, removing the pointer also removes the highlight from whichever menu item the pointer was over), set a default save location, and automatically bring the target window to the front of the stack, and restore its original position after the snapshot has been taken.

This new version includes some under the bonnet changes and minor bug fixes, with some changes more obvious to the user:

Soon after releasing version 1.17, Chris also released version 1.17, which fixed a bug in version 1.17 whereby, under certain conditions, the desktop font would revert to the system font when Snapper was quit – if in doubt, look at the ‘Info’ window from Snapper’s icon bar menu. If you have version 1.17 (which is dated 15th July), you have the correct version.

Snapper can be downloaded from two separate locations, here and here.