Hheaps of hhectic gameplay for the price of a download or two.

Chris Gransden is continuing to keep himself busy porting things to RISC OS, with Hheretic and Hhexen having been announced just a couple of days before this year’s Wakefield show. These two games are ports of Hheretic and Hhexen, which are Linux ports of Heretic and HeXen – with the extra ‘H’ in each name standing for ‘Hacked’ – originally developed by Raven Software and published by id Software. 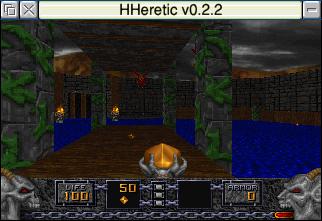 Based on a modified Doom engine, Heretic is a first person shooter game from 1994 which takes place in a fantasy world, setting the player as an Elven character called Corvus. The objective is to defeat a character called D’Sparil, one of the three evil ‘Serpent Riders’, after first working through the levels, collecting the keys that allow further progression, collecting weapons to help in this task, and so on. 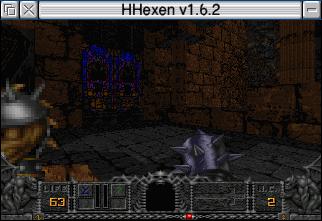 Also based on a modified Doom engine, HeXen started out as an expansion for Heretic, and was originally going to be released as Heretic II. Development saw the game expand beyond the original plans, however, so it was given a new title: HeXen: Beyond Heretic. In this game, the player takes on the role of one of three heroes – one a fighter, one a cleric, and one a mage – who set out to take on the second of the Serpent Riders, Korax. Gameplay varies according to which character the player chooses, since each of them has different characteristics and ways to attack enemies.

In order to play the games, you will need suitable WAD files – these are files that contain the graphics, level maps and game data. These can be found on the original game CDs, with alternatives being available on-line – refer to the !Help files of both games for one possible source.

Although the riscos.info website describes it as deprecated, and used only by older ports, neither of the two games would run here until UnixHome was installed. You will also need the latest version of the DRenderer module, which is normally supplied along with the SharedUnixLibrary, but updated versions are provisionally available from Christopher Martin’s FFmpeg page.