And some other game updates from AMCOG, too.

A number of titles from AMCOG Games – specifically, those that run in 16 million colour screen modes – have been updated with improved compatibility with the latest ROM updates for ARMX6 and Titanium machines.

At the same time, the company has seen fit to add some new features to the products, as follows: 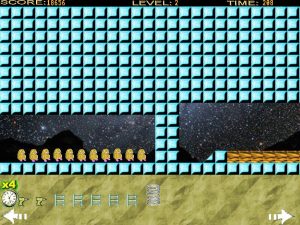 Eleven Mop Tops doing the Can Can (okay, not really) at four times the normal speed. Image courtesy of AMCOG Games. (Click for bigger version)

Mop Tops has gained a button to speed-up the titular characters’ progress as they traverse the screen. This means that once the player has placed objects where they (think they) need to be in order to solve the puzzle and get the Mop Tops to the exit, it’s not necessary to wait so long as they do so – or until it all goes horribly wrong if the player made a mistake and the puzzle hasn’t been solved.

The price of Mop Tops has also been reduced to £7.99 for a limited period – so if you’ve yet to buy this fun Lemmings-inspired game, which features thirty levels, now could be the time to do so. 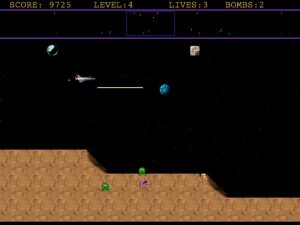 You are here: The improved scanner in protector. Image courtesy of AMCOG Games. (Click for bigger version)

Mutant Penguin, in which the player – in the form of a chocolate biscuit that has mutated into some kind of bird (er, that’s right, isn’t it?) – must eliminate slug-like spods in order to make progress through the game, has gained two new levels.

And finally, the AMCOG Development Kit, which is designed to make writing games for RISC OS easier, now includes the ‘particle accelerator’ routines used in Protector.

The updates are free to anyone who has purchased the titles previously. If they were bought via !Store, it’s simply a matter of downloading the update via that application. If bought through other means, such as directly from Tony Bartram at a show, there should be a code included with the software; this can be punched into !Store to obtain the new versions. (And in the case of Mutant Penguin, which is free anyway, the update is available to anyone through !Store).

And for anyone coming to this year’s Wakefield Show on 21st April, look out for another new title from AMCOG Games!