First launched at the recent London Show, where it could be picked up on compact disc, Protector is the latest release from AMCOG Games, and it has now been updated to version 1.17, and for a mere £9.99 can now be purchased from !Store. 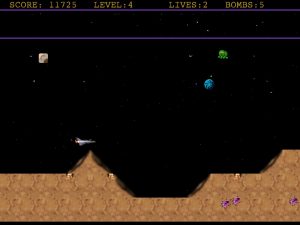 Screen grab of the game Protector, courtesy of AMCOG Games

The game is set on a world in which the planet and the beings that inhabit it are as one. An alien force is invading the planet, and are trying to capture the inhabitants from the planet’s surface. Each one that successfully does this, lifting its captive far enough above the surface, will mutate into a new, frenzied form. The player takes on the planet’s last line of defence – the last Protector, piloting the only remaining ship capable of fending off the invading force.

As well as the aliens themselves, the Protector has to watch out for and destroy various ships and automated weapons deployed to support them – bombers, bots, pods, podlings, rollers and missiles. Once all of the these from any given wave are destroyed, the player progresses to the next level and faces the next wave of the attack – and with luck, eventually the fight will be taken away from the planet’s surface as the aliens are driven off.

AMCOG’s Tony Bartram has uploaded a video of the game to YouTube:

The game was developed with the AMCOG Development Kit and features five original music tracks, sound effects courtesy of the RDSP module, full colour graphics, unlimited levels, seven different types of alien – and, as ever with AMCOG’s games, customers will be able to download any future updates for free via !Store.

It is compatible with RISC OS systems based on all hardware since the Beagleboard, as well as emulators VirtualAcorn and RPCEmu.