Those in the world of RISC OS who possess long memories will know that there was a time when if you wanted to connect a scanner to your Acorn computer (because this was at a time when Acorn were still around, and the only suppliers of computers that ran RISC OS), there was a very good chance you’d be buying the necessary software from David Pilling. 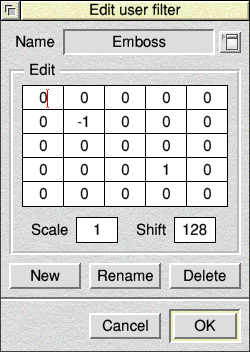 Editing a user filter in DPlngScan

Along with the necessary TWAIN driver for your scanner, the key component of the software suite he supplied was DPlingScan1, an application for manipulating bitmap images with a variety of options for exactly what the nature of that manipulation might be, including a selection of filters, colour and palette change options, cropping, shearing, rotating, and so on. And, as you might expect, converting from one image format to another is also covered.

For some time now, David has been ‘retiring‘ some of his old software, and making the source code available with, subsequently, some of those applications being taken up and maintained by Chris Johnson. DPlngScan is not one of these retired applications, but with David’s cooperation and agreement, Chris has made some updates to the application, and the latest version is now free to download from his website [mirror].

Bringing the application up to version 1.27, the changes in this version are:

Unsurprisingly, with Chris now maintaining the software, he should be the first point of contact in respect of it. Contact details are supplied in the manual.