Steve Royd-Marker, the designer of the PiCano case for the Raspberry Pi, first launched at the RISC OS eXperience, 2013, and sold in the UK by R-Comp, has been in touch with a couple of photographs of a black PiCano case, and some explanatory text to go with them. Here are those photographs and what he wrote:

Wondering what it would look like, I started out painting the blank aluminium parts of a PiCano black. But as usual things aren’t that simple. The problem was the anodized top layers of the aluminium plates. Anodizing aluminium gives it a top layer of a few microns thick, which is as hard as glass. This is nice to prevent scratching but when you try to paint on top of this layer, things go wrong!

I knew in advance that this would be a problem, but I did try to paint it to see if the paint could hold long enough to take some pictures – but it didn’t. The paint that did stick to the anodised aluminum had the tendency to pull together (like raindrops) and, when I finally got it coated, it could be removed like a sticker once it was dry – without applying force.

The paint is repelled by the anodisation layer like water on a raincoat. Therefore it was necessary to remove the layer before it was possible to paint it properly. This meant sanding it. With the aluminum being soft and the anodisation top layer being glass hard, this was indeed a difficult job.

But my misery did not end there. Having sanded the aluminum surface, it gathered dust that embedded itself into the aluminum, which only came lose as soon as I started paining. After redoing it several times I still ended up with a doubtful result. I decided to try to take pictures keeping the black surface out of light reflections so the the dust particles in the paint do not show in them. 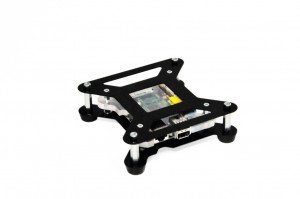 This more or less worked – so now I can present what it will look like when, instead of blank anodised aluminium, black anodised is used. To me this looks like an option when production numbers become large enough, especially fore use on the back of black monitors, TVs, and so on. 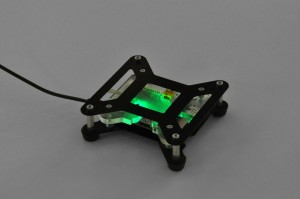