Organise it and a handful of them will come.

It’s now been two weeks and a day since the Midlands Midsummer MUG Show 2013 took place, and people are telling me that it’s about time I sat down and wrote about it! Well, they aren’t, perhaps because I’ve already said in various places that I’m busy, but they’re probably thinking it. So here’s that report.

I’ve flicked a coin, and it told me to take an anti-clockwise tour around the show.

Upon entry into the main hall, the first thing you were greeted with on your right was the snack bar. Apparently, the rolls didn’t sell as well as they could have and, towards the end of the day, the organisers were trying to flog them off cheap. However, while I don’t know how well the drinks sold, I do know that I had a few coffees throughout the day.

Next to the important source of sustenance was the charity stand, supporting Tools with a Mission; visitors could buy a wide selection of software, books and the usual interesting kit, as well as donate old tools. The charity’s aim  is to collect and refurbish tools and equipment that people no longer need, and sending it overseas to countries that need them.

Immediately next to the charity stand was Robin Edwards of Serious Statistical Software, demonstrating his, um, statistical software. It’s very serious stuff. And, all joking aside, from the demonstration Robin gave me, it does appear to be very powerful, producing graphs and reports from the data he was using very smoothly and quickly.

Next was one of the two biggest stands of the show: R-Comp‘s. Andrew and the team had brought along the usual array of goodies, and also introduced two new products. 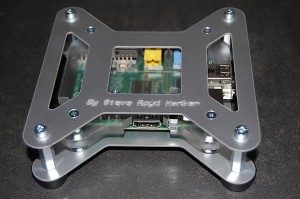 The first of these is the PiCano case for the Raspberry Pi. This is the Raspberry Pi case released in Europe recently at the RISC OS eXperience 2013. Designed by Steve Royd-Marker entirely on RISC OS (right down to its instruction sheet, which was produced in ArtWorks), R-Comp were showing off the brushed-metal case here in the UK.

The second of these, which utilises the PiCano, is the ARMin1 – an all-in-one RISC OS computer. Based around the Raspberry Pi and said case attached to the VESA mounts on the back of a monitor, the computer is available in a variety of screen sizes, priced from £399.

After R-Comp, Orpheus Internet‘s stand could be found, manned as ever by Richard Brown, and complete with the usual bowl of sweets.

(During the packing-up phase, I quizzed Richard and Andrew about next year’s South West Show. It seems at this stage they don’t have a date, but they confirmed that the show would definitely happen.)

For those with a fetish for being organised, the next stand would have been right up your street – for that was where you would have found North One Communications and Organizer, the – no, THE –  personal information manager for RISC OS.

Nigel Wilmott of North One was also talking about risc/pi, the company’s new website, which launched in March and aims to provide news and things general interest to both the RISC OS and Raspberry Pi communities. Nigel posted a number of items to the site during the show. 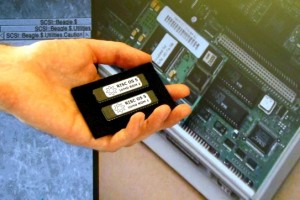 RISC OS 5.20 on ROM, held (by Rob Sprowson) in front of a still frame of the installation video

There was a variety of goodies to purchase from RISC OS Open, from the usual things such as the developer suite, the Emulate SD cards, the Native SD cards, and so on – through to the much more interesting RISC OS 5.20 on ROM, suitable for use in a RiscPC or A7000!

RISC OS 5.20 is the first version of RISC OS 5 to be formally tested for use on Acorn branded hardware, and the ROMs are supplied with a CD containing full instructions, a video installation guide, and a collection of supporting software, all for £30 plus VAT (and postage if you don’t purchase at a show).

Regarding the free show RISC OS Open recently proposed for Portsmouth, with the original suggested date being one week after the Midlands show, the guys are now looking at September, with either the 21st or 28th apparently being the most likely contenders.

Chris Evans and Andrew Conroy had brought along the usual wide array of hardware and software for the CJE Micro’s stand, the other of the two biggest, which extended across one end of the hall – and they had also brought along something new: the In-a-Box range.

What’s that you say? A lot of things you buy come in a box? Well, yes, but that’s not actually what the In-a-Box range is: It’s one of the boards that runs RISC OS – such as the Raspberry Pi – in a wooden box, with a small display attached: Something small and portable, with the only additional components needed being a keyboard and mouse.

Steve Fryatt was next with his usual selection of software. These days, Steve is doing a damned fine impersonation of me, by not having done much, if any, RISC OS related work since the last show.

Meanwhile, I was next, on the Soft Rock Software stand, and I was letting the side down and doing a very weak impersonation of me – because I have managed to get some work done on WebChange’s main manual. It probably says a great deal that this seems to have been a direct result of switching platforms to write the manual – whereas I was previously using OpenOffice on Windows, it is now being [re]written in EasiWriter on RISC OS, and progress is much better; the main manual should be ready by the London Show, which means that show should see WebChange formally released as version 3.00. At last.

And finally, yet another port of Doom was available to play (networked) on a couple of Raspberry Pis, which was one way to while away the time. This version is called Chocolate Doom, which has been ported to RISC OS, in the form of ChocoDoom, by Franck Martinaux of NO RISC – NO FUN.

Something that needs to be said is that the show had a somewhat disappointing turnout, with visitor numbers only reaching (I am told) the 20s (compared to the 40s last year). Being the smallest show of the year by far a fairly low attendance is to be expected, but I’d estimate the number of people manning the stands was between fifteen and eighteen, so with the number of visitors not even doubling that, the organisers perhaps need to ask themselves why attendance was so low, and what can be done to improve it.

The last thing anyone wants is for there to be no show next year. Even though it’s the smallest show of the year, it’s still an important one: All of the RISC OS shows are important, because they allow developers and companies to meet with users and customers, providing opportunities to discuss things that just aren’t the same when communicating remotely, whether that be by email or telephone, finding out how to do achieve a particular goal with an application, or seeing some aspect of how it works demonstrated.