Everything for one panda!

R-Comp, who last year brought out the ARMini computer, based around a BeagleBoard-xM and subsequently launched a software support scheme for BeagleBoard owners wishing to run RISC OS on their devices, have now produced a similar scheme for PandaBoard owners – with the potentially puntastic name of PandaLand!

The new scheme is intended to provide PandaBoard owners with software and operating system components with a degree of support – something that isn’t really there if you opt for the DIY approach of performing a self-install of RISC OS from the components available on the RISC OS Open website – and includes several hundred megabytes of software, and should therefore make using RISC OS on the PandaBoard something of a doddle, particularly the initial set up.

The starting point with the scheme is the supply of a fully licenced version of RISC OS (although it can be downloaded for free from the RISC OS Open website, R-Comp are selling it as part of a commercial product, and therefore have to pay a licence fee for each copy sold), which is suitable for use on the PandaBoard. This is supplied on an SD card, and is ready to run right out of the box – just insert it, connect everything up and add power. 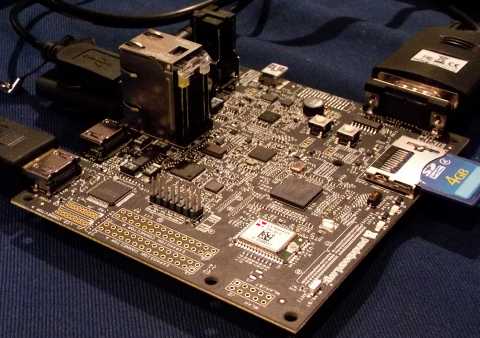 A Pandaboard on the RISC OS Open stand at Wakefield 2012

Just as they do for ARMini owners, and members of the BeagleBoard support scheme, R-Comp plan to provide members with regular, tested and approved updates to the operating system.

A CMOS RAM widget will also be supplied as part of membership, giving the PandaBoard the same CMOS capabilities of any other RISC OS computer – a real time clock, and the ability to maintain configuration settings in CMOS RAM – and another highlight is a development of R-Comp’s ARMini video enhancements, to provide support for a wide range of screen modes and to help eliminate a distortion issue that can affect the PandaBoard’s video output at high resolutions.

The scheme covers both the original PandaBoard, and the newer PandaBoard ES, and the pricing matches that of the BeagleBoard scheme, launched late last year. The prices for that were based on a calendar year, with the first year costing £69.99 and running for just over one year, taking it to the end of 2012, and then £39.99 for each subsequent year, with a one off price of £99.99 providing membership for the lifetime of the scheme, and representing excellent value for money considering that it’s the equivalent of just under the price of the first two years.

In addition to this, and recognising that some people are likely to have both BeagleBoards and PandaBoards, R-Comp are offering a cross-over scheme, whereby existing members of the BeagleBoard scheme can add a field trip to PandaLand for £39.99 – which covers everything, including the physical components; the SD card with RISC OS and the CMOS widget, as well as VAT and postage.

Members will also qualify for discounts on software and hardware purchases from R-Comp, who’s stated goal is to treat those who join these schemes just as well as they treat customers who buy complete computer systems from them – and in that connection, it’s planned that a full case and accessories will be made available to PandaLand members at an affordable price, to turn it into a desktop computer system, complete with card readers and other connections, allowing CD drives and similar to be added internally.

Acknowledging that there are still some software incompatibilities – for example, Photodesk has problems, and Ovation Pro sometimes crashes when first loaded – R-Comp’s Andrew Rawnsley stresses that the latter options do not represent an “off the shelf” computer system; the aim will simply be to allow users who have taken a ride through PandaLand to have as close to a complete desktop experience as R-Comp are able to offer.