Come and ‘ave a go if you think you’re ‘ard enough!

Christopher Martin appears to have taken a break from his ongoing stream of releases of new versions of OpenVector, OpenGridPro and DrawPlus, FFmpeg and FFplay, and DRenderer – and has now announced the release of a port of Dungeons of Daggorath.

The game originally dates back to 1982, when it was originally available for two systems – the TRS-80 Colour Computer, and the Dragon 32/64. Described as a ground-breaking game, which some have referred to as “the original Doom”, it was apparently one of the first to feature role playing and a first person perspective. Published by DynaMicro, the game was developed by Douglas J. Morgan and Keith S. Kiyohara, with sounds (and the original idea) by Phil C. Landmeier – sounds which included a human heartbeat, with Dungeons possibly the first game to include this and use it as an atmospheric indicator of exertion, health and vulnerability, leading to the typical health indicator that has become standard in later games. 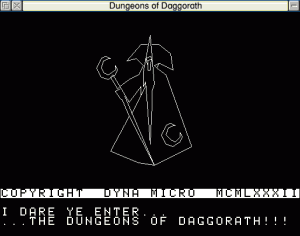 Douglas J. Morgan, who was the president of DynaMicro, as well as the lead developer on the game, has since made the source code available, noting that his original licence with Radio Shack was exclusive, but reverted to a non-exclusive licence when they ceased to produce and sell the game, leading the way for his decision. A port to the PC was led by Richard Hunerlach, and Christopher Martin’s port is based on version 0.5 of that, giving us version 1.00 for RISC OS, which Christopher describes as a test-bed for ports of SDL and Mesa libraries.

The game requires version 1.07 or higher of the SharedUnixLibrary, and DRenderer version 0.56 beta 8, a minimum of a StrongARM CPU, and does require long filename support. 15MB of available system RAM is also required since the modern ports will no longer fit into the same 8kB as the original!

One word of caution: On my IYONIX pc, having followed the initial set-up instructions, running the game caused NetSurf to quit, followed by a “FileCore in use” error message. Upon rebooting, the game ran perfectly happily.