Visitors to the recent London Show – and readers of the RISCOSitory account of the event – will know that one of the items on display was a keyboard on the RISC OS Open Ltd stand. However, this wasn’t just any old keyboard, but something a little more interesting.

The most obvious thing was its appearance: It was black, just as many keyboards are these days, but it sported a row of red function keys – something long standing RISC OS (and earlier) users will recognise as a common feature of keyboards attached to many Acorn computers, starting with the BBC Microcomputer. 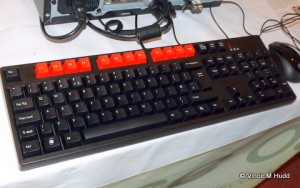 Elesar’s weighty, solid – and rather nice – keyboard at London 2015

In use, the keyboard was very impressive, with the keys feeling solid and offering a degree of feedback that is often sorely lacking on modern keyboards. This is because each individual key has a mechanical keyswitch behind it, rather than a rubber membrane.

The keyboard was provided by newly formed Elesar Ltd – responsible for the Cortex-A15 Titanium board – and the company has now announced that the keyboard is available to order, in one of two variations.

There is one minor difference between the two variations: The so-called “Windows key”. While one of the two – which was the version on display at the London Show – has the common ‘Flag’ graphic on that key, on the other it is replaced by a ‘Cog’ graphic, which will undoubtedly be more appealing to RISC OS users.

Additional features are more contemporary: As well as a dollar sign, the ‘4’ key also sports a Euro symbol, and “SysRq” and “Pause” are gone from “Print Screen” and “Break” keys – and there are risers underneath to provide an additional four degrees of incline.

The keyboard costs £66.00 plus postage – but beware that the keyboard isn’t light, so the postage cost is going to reflect that. Let’s hope there will be some to purchase at future RISC OS shows!