Even more ways to avoid being productive.

Hot on the heels of Wakefield, Sine Nomine Software have announced new versions of their popular puzzle games, Wrangler and SuperDoku, adding new puzzle types to both.

SuperDoku is an advanced Sudoku generating and solving application, which can handle more than just standard Sudoku puzzles – it can cope with puzzles of different sizes and shapes, jigsaw blocks, extra blocks, and much more. This update brings it up to version 1.27, which adds Diamond puzzles; Sudoku puzzles with extra blocks, forming an overall diamond shape. 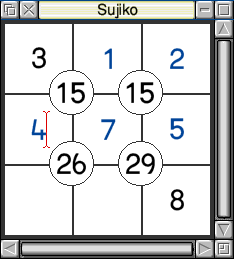 Playing a Sujiko puzzle in Wrangler

Wrangler is a more general mathematical puzzle application which, with this update to version 1.05, adds three new puzzle types, bringing the total up to seven,  as reported at Wakefield. The new puzzles are Hitori, Suko and Sujiko, with the first being pure logic, and the other two involving a little adding up. This update also fixes a couple of bugs which those who purchased version 1.04 at the show might not yet have encountered.

The upgrades are free to registered users – simply download the new versions from the Sine Nomine Software website. For those who have yet to purchase, the unregistered versions will allow you to play a limited number of puzzles, but registration costs just £5 for each of the two applications.