Now, where are my Simon the Sorcerer discs? And how do I get the contents onto my ARMX6?

A major new version of ScummVM has been released, including a version for RISC OS.

The software is a ‘virtual machine’ that makes it possible to play a raft of classic “point and click” adventure games – including a great many that were never ported to our platform in the first place.

Point and click adventures follow the same basic principle as classic text adventures (or interactive fiction), but instead of seeing a description of a location and what can be found there, perhaps with an image of that location, the text is largely dispensed with and it is just an image (often with some animation) instead. 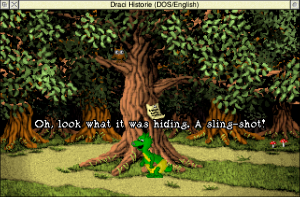 There is often some text overlaid for the purposes of disposition, perhaps the player character’s thoughts being elucidated for the benefit of the actual player, or dialogue between characters on screen, and more clues are revealed by moving the mouse around the screen; the pointer will often change when over something the player can interact with. The player then controls the action not by typing in instructions, but by – as one might guess from the sub-genre description – pointing and clicking.

The name ScummVM stands for “Script Creation Utility for Maniac Mansion Virtual Machine.” It’s a name that reflects the software’s origins, but not its modern scope. It was originally developed as a means to play games developed by LucasArts using a utility called SCUMM, but has since been developed to cope with games from many other software houses. It works by bypassing the executable parts of the original games, and effectively becomes the executable on the platforms on which it runs, and acts upon the data files that formed the basis of the actual games.

ScummVM is available for a number of platforms, and version 2.0 of the software was made available on Sunday, including a build for RISC OS. The developers say that this release “adds support for 23 brand new old games,” thus increasing the number of games that can be played on our platform as well.

As well as an increased number of games, work has gone towards improving the way many of the already supported games work with the software, and there have been improvements to the sound and video system. 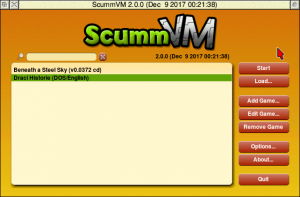 Once you have all the necessary files on your computer for a given game, installing it to run in ScummVM is relatively painless – though it doesn’t benefit from such niceties as drag and drop.

The game files need to be located in a suitable directory, and from ScummVM’s main (and only) window, click the ‘Add Game’ button and you will see a load dialogue rendered the window; use this to navigate your system to where the directory containing the game is found. Select that directory – but don’t open it by double-clicking on it – and click on the ‘Choose’ button. The game should now be listed in the main window, where it can be played by selecting it and clicking on ‘Start’.

For most of the games supported by ScummVM, you will need the original media on which the game was supplied in order to get the data into the system – and the ScummVM website includes a wiki with extensive help on what data files are needed for any given game.