A modern event with a retro bent! 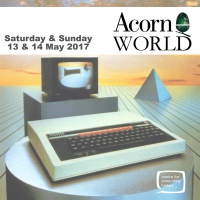 n just over a week’s time, the Centre for Computing History, based in Cambridge, will be hosting an event that should be of interest to anyone with fondness for computers that came from the Acorn stable – Acorn World 2017.

The event has been organised by the Acorn & BBC User Group in association with the museum, and will give visitors an insight into how Acorn started, some of their innovations, and the legacy they left behind – successes such as ARM and other technologies, RISC OS, and modern systems that use the processors and operating system.

There will be a range of Acorn-era computers on display – and in some cases running for visitors to try out for themselves – a range covering everything from the System 1, through to the iconic RiscPC – which many recognise as the the pinnacle of Acorn’s computer designs – and beyond, including the never-released Phoebe, and a number of rare prototypes. The vintage displays will also include classic magazines, sure to set those nostalgic flames burning, and software which enthralled, entertained, and educated many users – and even inspired some to go into programming themselves.

Some of those classic computers have been given a new lease of life by enthusiastic users, with modern add-ons and other clever innovations – and there will be a number of these on display as well.

The exhibition doesn’t just stop at machines that came directly from the Acorn stable, though – there will also be post-Acorn systems, including the ultra-cheap Raspberry Pi and at the other end of the scale, the ‘slightly pricier’ Titanium – both of which are themselves children of Cambridge.

Hands-on exhibits will include an opportunity to try out some programming on an original BBC Micro in BBC BASIC, with the same program then being run on a Raspberry Pi using RISC OS Open’s Pico release. There will also be the opportunity to use Logo to drive a BBC turtle, and the chance to play with an ARM-controlled robot arm, although the Terminator from which it was recovered (and which came from the future) has been destroyed (um… I may or may not be making that bit up).

Speaking of time travel, visitors will themselves have the opportunity to engage in a bit of temporal displacement, with a trip back to explore the UK in 1986… oh, no, hang on, I misread that bit. It’s actually the chance to look over explore data in the BBC Domesday Videodisc system, which was compiled in 1986.

Tickets for the event are available in advance from the Centre for Computing History, with a standard adult ticket for one day priced at £8.00, and a child ticket £6.00. Family tickets are available, giving access for two adults and two children, and cost £24.00. Entry to Acorn World 2017 also grants access to the rest of the museum’s exhibits, which include all manner of computers from the last fifty years – from home computers to mainframes, as well as games consoles, and much more, including the Megaprocessor!