If you are designing or developing a piece of hardware and need to use a microcontroller, you will need a way to program it. There are many tools to do this available for other platforms (x86 in particular) – but there is also a solution for RISC OS users in the form of Rob Sprowson’s PIC suite.

PIC Suite is a set of applications that make it possible to develop for Microchip’s range of 8-bit PIC microcontrollers, and it has reached its 20th birthday. To coincide with this, Rob has just released an update for the suite, adding a greater range of supported devices, which now stands at 110.

The software included in the suite comprises: 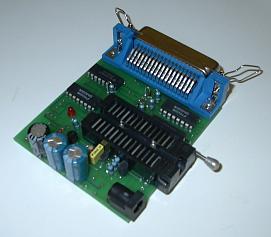 A comprehensive printed manual is included, along with a hardware interface for programming the microcontrollers. This uses a parallel interface, which is standard on older hardware such as the RiscPC, and available on some modern systems as an add-on – via a PCIe card on Titanium or a parallel port HAT on the Raspberry Pi, for example.

Note, however, that some PIC devices will require a passive programming adapter to fit into the ZIF socket on the programmer hardware.

For December, the price of the suite has been discounted by £20 to celebrate its 20th birthday, and Sprow can also provide a suitable power supply and a centronics printer lead if needed – full details on his PIC Suite page.

Existing customers should by now have received the application updates by email – but if you are a customer and haven’t (perhaps because you’ve changed your email address), then there is a contact link on the same page.