﻿Back in the 1980s, there were quite a lot of 8-bit home computers to choose from and, while it might seem somewhat surprising to us RISC OS using Acorn fans, some people actually chose other machines than Acorn’s BBC Microcomputer.

And enjoyed using them.

One of the most popular of these was the Sinclair ZX Spectrum which, it its original form, was a tiny little rubber keyed beast sporting either 16kB or 48kB of RAM. It sported a screen resolution of 256 x 192 pixels, or 32 x 24 characters, and actually had a slightly better palette than the Beeb; you could choose any of seven colours at one of two shades (normal and bright), plus black – though, for graphics, the colour attributes could only be set for an 8 x 8 pixel block, rather than for each pixel.

Users of modern machines have been able to put themselves in a position to try and understand the mindset of those who liked such quirky little machines by way of emulators, and one such emulator is called Fuse, the Free Unix Spectrum Emulator. Originally developed for Unix, it has also been ported to Mac OS X, Windows, Amiga OS, MorphOS, and even the Nintendo Wii – and now, thanks to the efforts of Chris Gransden, it has also been ported to RISC OS.

The RISC OS port, which can be downloaded from riscos.info, runs at 100% emulation speed on a minimum of a StrongARM RISC PC, and features: 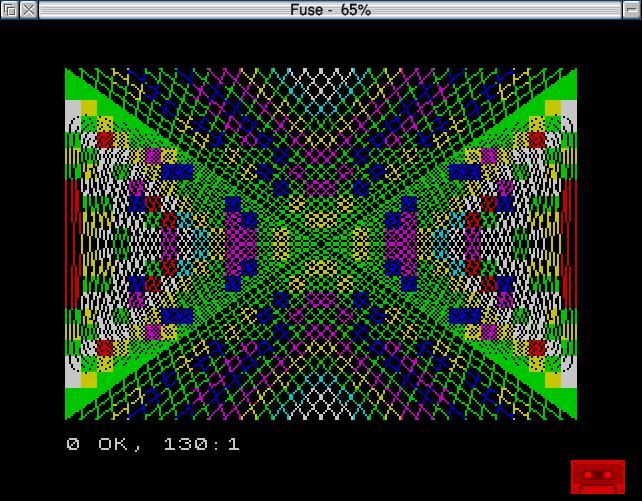 The results of running a simple graphics program written in Sinclair Basic on the Spectrum emulator - showing the effects of colour attributes that apply to 8x8 pixel blocks. 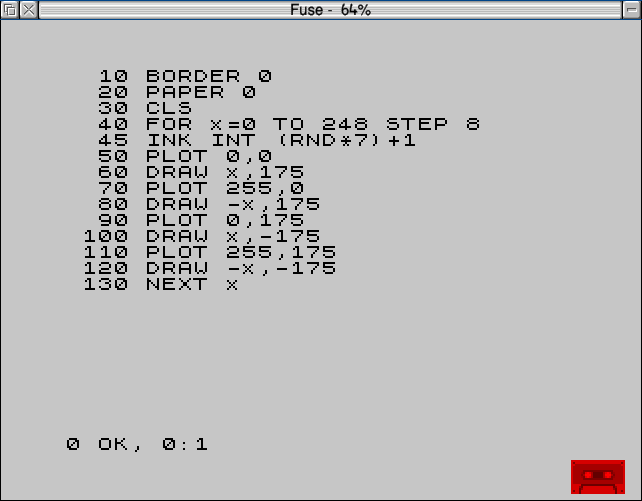 And the program itself - note that, unlike BBC Basic, the DRAW command uses relative coordinates, whereas PLOT uses absolute coordinates. Even the BASIC is quirky!