Richard Windley of The Really Small Software Company has announced the first release of Skinny, a theme creation application that allows you to change the appearance of the RISC OS desktop. 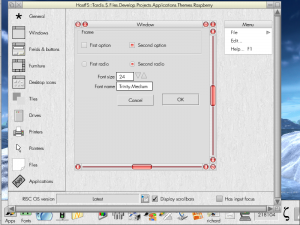 The application provides an easy way for you to define the sprites used for the normal window furniture, common desktop sprites and certain window manager icons. However, to actually apply any themes you create with Skinny, you will also need the Themes Manager from Little Yellow Moon Software.

According to Richard, development of Skinny started some time ago, but this is still an early release (it’s version 0.10) and, as such, it is very likely to have some issues. He has tested Skinny on RISC OS 6 (from RISCOS Ltd) and briefly on RISC OS 5 on the Raspberry Pi. The software does currently require the RISCOS Ltd Toolbox modules, but Richard says they seem to work okay with the limited amount of testing he has carried out.