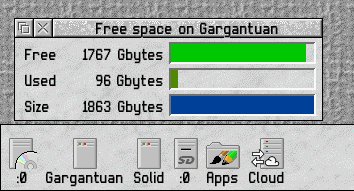 An epic amount of storage on RISC OS

RISC OS Open Ltd promised us an epic announcement at Wakefield – and this might just be it: The company will be demonstrating “previously unheard of amounts of storage on RISC OS” with a 2TB – that’s two TERRABYTES – drive attached directly to a disc controller on a RISC OS computer, in native Acorn FileCore format.

An image of a RISC OS machine with a ‘Gargantuan’ hard drive was posted by Rob Sprowson to Twitter earlier this week (with the image stolen and included here), though at the time he denied that it could be called epic.