Between sealing the doors shut on the RISCOSitory bunker and my arriving at the Cedar Court Hotel in Wakefield, RISC OS Open Ltd have teased out another announcement – of sorts – concerning tomorrow’s show. I say “of sorts” because that announcement consists of nothing more than an image, which I have shamelessly lifted from their website and present below: 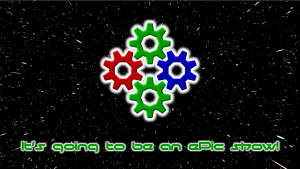 In other words, it’s not so much an announcement, but a tease – which may give a hint or two about what the “announcement of epic proportions” is that they’ve been promising.

One of the things that stands out is the word ‘ePic’ – rather than ‘epic’ – with the ‘P’ capitalised. What letter follows it in that word? Yup ‘i’ – and if you put the two together you get Pi. So is this something to do with the Raspberry Pi?

An alternative way of looking at that same word is that as well as the ‘i’ there’s also a ‘c’, and the three together make the word ‘Pic’ – this might hint that it’s nothing to do with the Pi, and instead something to do with pictures, images, or graphics.

Then there’s the logo above the text. If you rotate that by 45 degrees, you might find it looks somewhat familiar. I won’t say where from, leaving it up to you to try to remember.

Whatever the meaning of the image, one thing is certain: Tomorrow’s show is going to be very interesting indeed!