The first ever RISC OS show in Portsmouth took place on 28th September, 2013- and it seems to have been a successful one, with both exhibitors and visitors reflecting positively about the event.

The venue itself, the second floor of Innovation Warehouse Portsmouth, was comparatively small, offering a much more limited amount of space than other RISC OS shows, but the number of exhibitors filled the space very neatly, giving a good balance of things to see and people to talk to versus adequate space for visitors to be able to wander around without feeling crowded. All in all, it worked well.

So, who was there, and what could you see?

To answer that, I must first turn to my trusty coin to decide what route to take around the show – and it has told me to take a clockwise tour of the event.

A Pi in a Box on the CJE stand

The first exhibitor moving in that direction was CJE Micro’s, who’s extensive stand wasn’t quite as well stocked as usual! Despite this being the closest show to their home base, in Worthing, Chris Evans told me that they had actually brought a  less with them to this show, though there was still plenty to be had, with a notable emphasis on items useful for Raspberry Pi owners.

Next up, we had Christopher Dewhurst, representing on-off-on-off-under-new-management magazine, Drag ‘n Drop. The most recent issue of the PDF-based magazine appeared in July, and Chris informed me that the next one will be out on October 12th – next Saturday. In the meantime, you could buy the back issues CD for a tenner, the 55 BBC Micro and Electron Programming Books CD for a tenner, and exclusive Drag ‘N Drop keyrings and rulers for a quid a throw.

Turning the first corner, desktop organiser, er, Organizer and news website risc/pi were being represented by Martin Avison and Nigel Willmott and, next to them Ben Avison was the sole representative of RISC OS Open Ltd – apparently the show was, strictly speaking, Steve Revill’s baby but, when setting the date, Steve hadn’t taken into account another commitment he had. Oops! The usual array of development and emulation memory sticks, and RISC OS SD cards, were available from Ben, along with the RISC OS 5.20 ROMs for IOMD-based machines, and the RISC OS Collectors CD, which contains an archive of the 5.20 disc image, an archive of the Iyonix 5.20 ROM and flash programmer, and much more – including an installation video guide for the ROMs. 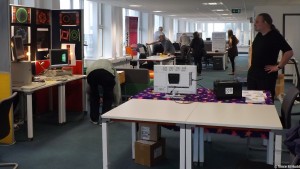 Turning again, the next exhibitor was Steve Drain, who was there to talk about Basalt, his module to extend and improve upon the BBC Basic language that comes as part of the RISC OS ROM image, by providing additional keywords, structures, and so on. Steve also had with him his wonderfully compact ‘Raspberry Pip‘ – a Pi that he has modified so that it fits in a flat case, about the size of a typical modern smartphone, and which then fits neatly on the back of a Motorola Lapdock. 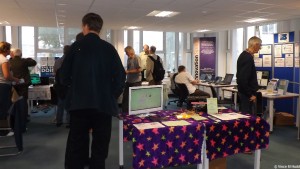 A steady stream of visitors

I was manning the Soft Rock Software stand, eager to talk about WebChange – which I’m still expecting hoping to be able to officially release as version 3.00 at the London Show later this month – as well as any of my other software and, of course, RISCOSitory. This show also saw the initial unveiling of a new website and initiative – the RISC OS Awards – which will see a more formal announcement closer to the London Show, which this year takes place on 26th October, at the usual location of the St Giles Hotel, Feltham.

Someone else who runs a RISC OS news website, RISCOScode, where most news is squeezed into a Twitteriffic 140 characters, is Martin Hansen, and he was manning the next stand. He’s been missing from a number of shows lately, but he returned with his usual colourful and well lit MathMagical Software Company display, where Iconizer was running and the some of its output could be seen.

Martin also had the table in the middle of the room, on which he was showing off his pet Raspberry Pi-based project, the Power SupPi. It seems he purchased an old wooden sailing boat in 2012 and, while sailing this summer from Ipswich in Suffolk, along the English Channel, to Dartmouth in Devon, one of his objectives was to get a Raspberry Pi up and running, and powered – along with any other electrical equipment needed for it – from the 12 volt DC ship’s batteries. Full details can be found in his (slightly longer than 140 characters) article on RISCOScode.

The penultimate stand belonged to R-Comp who, due to arriving so close to the show’s opening, by which time everyone else had marked out their respective territories (no, not like that, ew!) had a much smaller amount of space than usual, making CJE the clear winner of that particular competition. I spent a little time with Andrew Rawnsley discussing the latest developments to R-Comp’s answer to packaging; the PlingStore website and associated application, Store. The next version of the application, which is currently coming to the end of a beta testing cycle, will bring a major expansion to its capabilities, giving users the ability to purchase software online, as well as provide easy access to their own software and updates through their own account – and for developers, this means an easy way to offer their products for sale online.

Another piece of important news that Andrew was able to impart to me was that he now has a date for the next South West Show: It will take place at the usual venue, the Webbington Hotel, between Bristol and Weston-Super-Mare, on 1st March, 2014, so keep your diaries clear for that day. 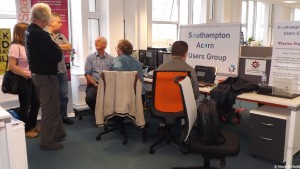 After R-Comp, the final exhibitor of the show was the Southampton Acorn Users Group. Dave Higton – whose name is definitely pronounced Mr USB; we discussed this very point – was making a noise with RISC OS, with the sounding being fed to external speakers, connected by USB. Not wanting to take all of the credit, Dave pointed out that a significant part of the work was done by Colin Granville (well known for FTPc, amongst other things), who was responsible for the USB stack, without which getting the audio out over USB wouldn’t have been possible.

Also on the Southampton Group’s stand was something put together by CJE’s Andrew Conroy – the LED Cube. This is an 8x8x8 cube of LEDs, connected to, and being controlled by, a Raspberry Pi – running RISC OS, of course. The cube was running a rolling demonstration of different light patterns, including a simple scroll text (the words CUBE LED) running around the four vertical sides. Now, for the London show, Andrew, I expect to see the lights being synchronised with some music – coming at us from USB speakers, obviously. No pressure.

While Andrew gets to work on that, here’s his video of the LED Cube on YouTube:

This was the first show of its kind organised by RISC OS Open Ltd (if you don’t count the Raspberry Jam that went ahead on the date they originally proposed for the show), which was done in conjunction with Innovation Warehouse  Portsmouth, who were our kind hosts for the day – so many thanks to all those involved for an enjoyable event. 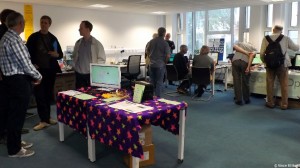 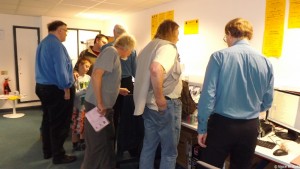