…where your prescription is one tablet per… well, just one, and that’s all you’ll need, actually.

It’s unlikely that anybody in RISC OS land has failed to notice the rise in popularity of tablet computing. Tablet and touchscreen devices have been around for a while, but (mobile phones aside) had failed to impact on the computing world in any noticeable way until Apple launched their iPad, and other devices started appearing based on Google’s Android operating system. In most cases, these tablet computers run on one of a number of ARM based processors – which owe their very existence to Acorn Computers, the company that developed the ARM processor in the first place, put it in a desktop computer, and wrote an operating system to use it.

Recognising that there was a circle in need of completion here, R-Comp has brought us one step closer to doing just that by announcing the latest addition to their product range, which will be seeing its debut at the Wakefield Show, this coming Saturday, 28th April, 2012. 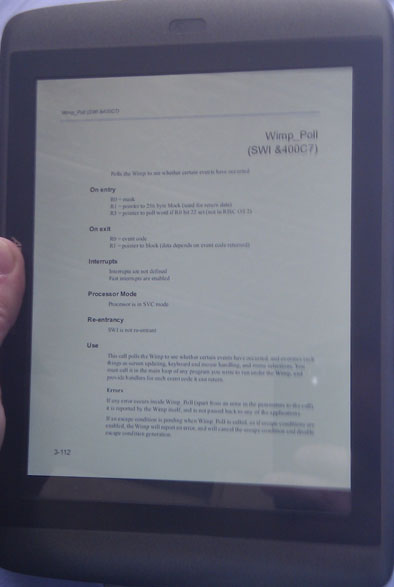 The R-Comp Tablet is described as an affordable device, powered by a Cortex A8 architecture, similar to that found in the ARMini, supported by an “attractive graphics chip”. The low power usage offered by the system, a major factor in why ARM processors are so widely used in such devices, means a plentiful battery life, and an instant resume from standby mode.

The device doesn’t quite complete the circle because it doesn’t run RISC OS, which is why R-Comp have chosen not to call it anything along the lines of RISCtablet, but it does run the very latest version of Android, version 4, widely known as Ice Cream Sandwich (Google’s naming convention for each major revision of Android is to name it after a food – of sorts, or at least something that claims to be edible – starting with the next consecutive letter of the alphabet).

Although it doesn’t run RISC OS, the tablet can easily be used alongside a USB equipped RISC OS computer – so anything from the IYONIX onwards, any RiscPCs that have been upgraded with USB connectivity, and just about any computer running RISC OS under emulation. Once connected to a RISC OS machine, files can easily be transferred by drag and drop, just as we are all accustomed to doing.

The screen is marginally under ten inches in size, and uses top of the line IPS technology, which provides consistent and accurate colour from almost all angles, and according to R-Comp’s Andrew Rawnsley, it “is stunning to look at,” adding that “it’ll probably make your computer monitor look quite mundane by comparison!”

Able to handle video up to full HD resolution of 1080p, the tablet can be hooked up to your television via the supplied HDMI cable, over which it can even send 3d video. It supports a variety of audio formats, and can stream content wirelessly to a suitable hi-fi. Alternatively, music (which you might have converted to MP3 from your CDs via R-Comp’s MusicMan software, for example) can be played through a set of headphones, which are also supplied.

Being an Android device, Flash is supported, giving you access to video content on YouTube and via the BBC iPlayer, easily and seamlessly –  but that’s only half the story; Android tablets offer a rich web experience, which makes this tablet an ideal tool to accompany a RISC OS computer, as well as being something a little more portable; not only can you put it on your desk beside the computer to access manuals and texts without them taking up space, or being obscured by other windows on the RISC OS desktop, but you can use it to look up information during the break in a TV program, take it into the kitchen to display a recipe, take it to the bedroom to read a book before bedtime – the possibilities are endless.

Note, however, that to get the best out of the tablet – using the web and streaming content in particular – you do need a wireless network, providing a connection to the internet.

And the price? The R-Comp Tablet will cost just £259 inclusive of VAT.